I know its been years (so sad) since I last wrote in my blog but I decided that this would be the year I stick to it. (We'll see how long it lasts, lol). I couldn't decide where to start. Four years is a long time to catch up on. What should I post first. After many a thought I came to the conclusion I should start with parties. Everyone loves a party. I've had 4 years of birthday parties to talk about. I've grown to love the stress and creativeness of planning a party on a shoe string budget. Don't get me wrong I'd love to spend the money my imagination would prefer, but lets face it we just can't. I mean I think anyone can have a beautiful party with a limitless budget. But its the real challenge of having a memorable blast on next to nothing... So my quest begins
The Goob's first birthday party was your normal minimal decorated backyard party with piñata. We had just moved back to NY from NC a few weeks prior. Steve almost out of the Marines. We were living at my in-laws. So it was difficult to pull anything together. His second birthday was better. It was my first real children's party to plan. I had just taken wilton course 1 in cake decorating. And Goobie loved trains. I had my theme. I remind you this was before I found my beloved pinterest. So I had no help. I made train ticket invitations on publisher. 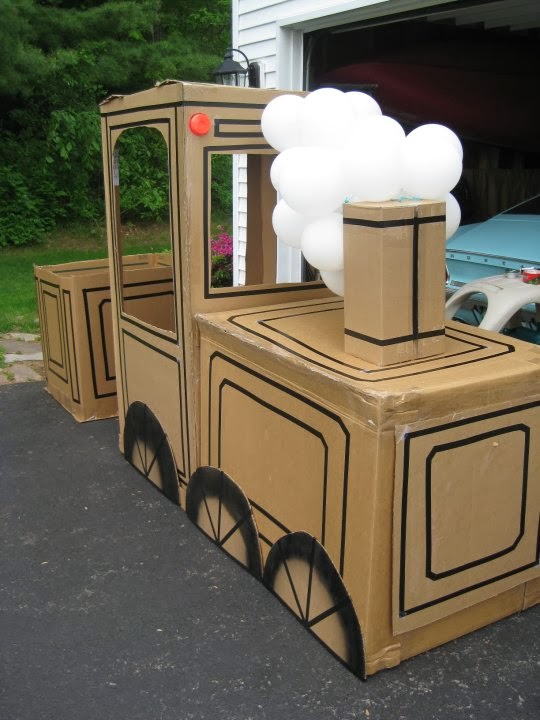 I printed them out on a heavy cardstock. Next came the crazy idea, cardboard train. My husband looked at me like I had lost my mind. But I convinced him of the sheer awesomeness of it. I dove for 2 weeks straight in the cardboard dumpster behind the local appliance store to find the right size boxes. Then I proceeded to cut, tape, and glue myself a train. Looking back I wish I had painted it instead of using just electrical tape. I did make it so the kids could crawl right threw the front of the train. The smoke was just some white party balloons. I set up a few tables in the backyard under a tent. I had streamers and balloons. I did red table cloths and put blue painters tape tracks down the middle of the table. I had bandanas and red and blue lanterns for my centerpieces. I made the confetti with a hole punch. 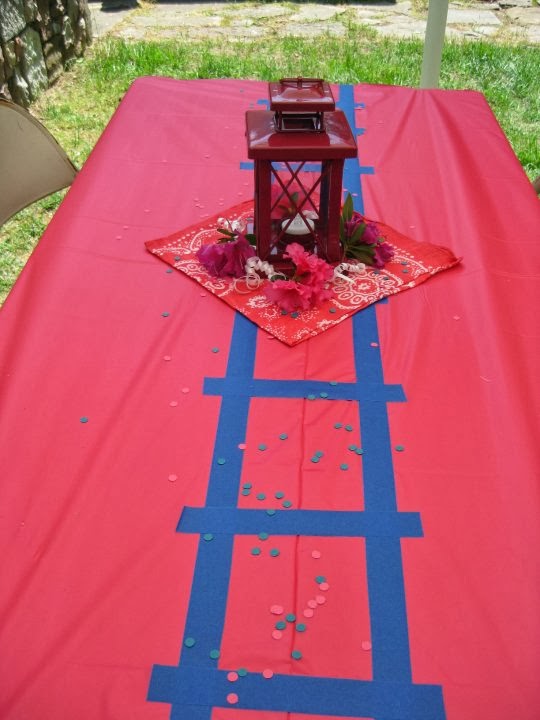 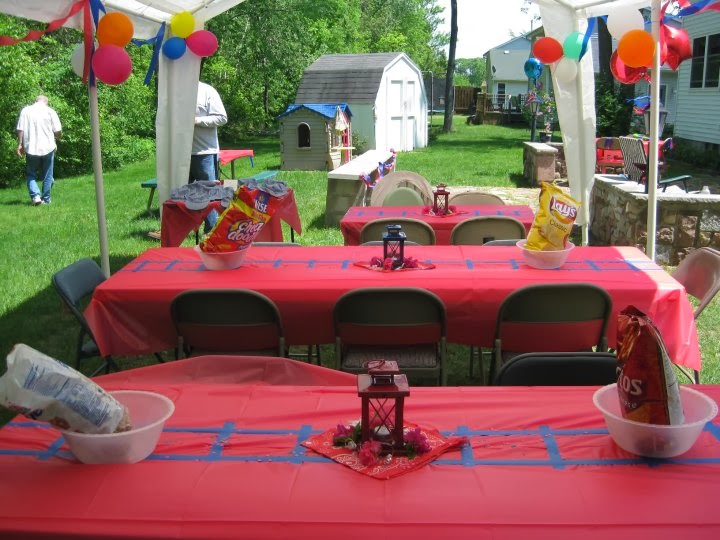 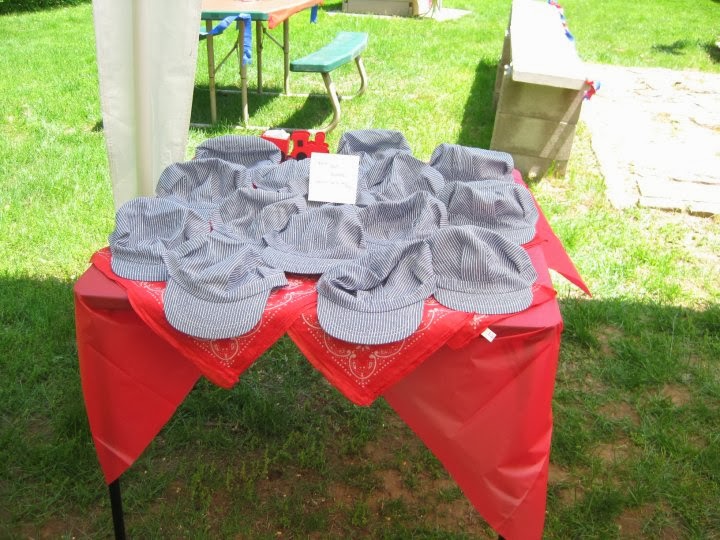 I bought bandanas and train hats for all the kids. 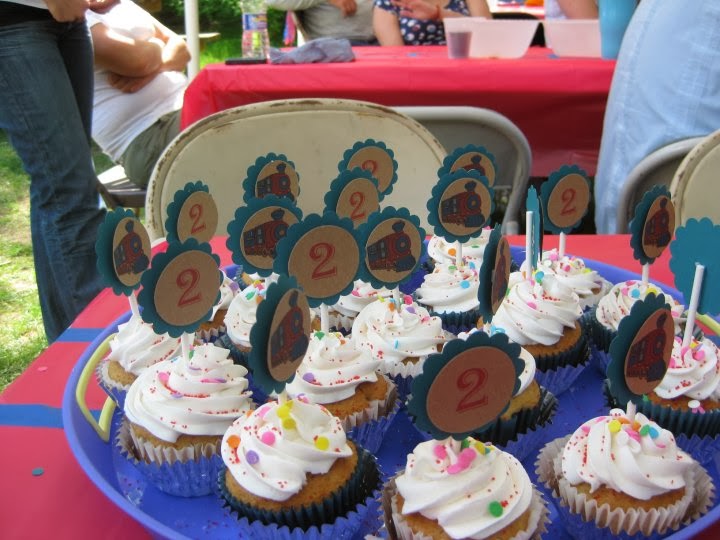 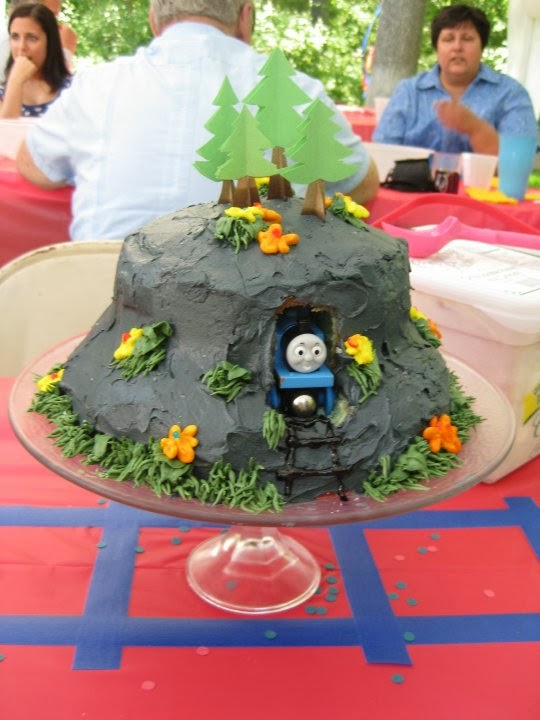 As for the cake... it was my first attempt at any cake besides a 13x9 never leave pan cake really. I wanted a mountain with a train. So I made a mountain with a tunnel with a wooden Thomas coming threw. I made a few paper trees for the top. It seems kind of simple now but it amazed me at the time. I did the whole thing in buttercream (I had yet to venture into the world of fondant). I also made cupcakes. I use the same train from the invitations and a few different punches to make the cupcake toppers. All and all everyone had a good time, especially the kids. Plus it started my love of all things party :) 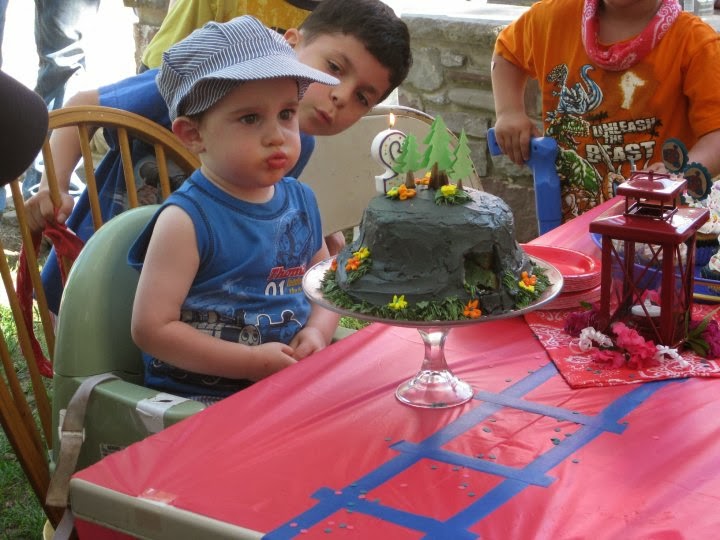